So you want to do a juice cleanse… 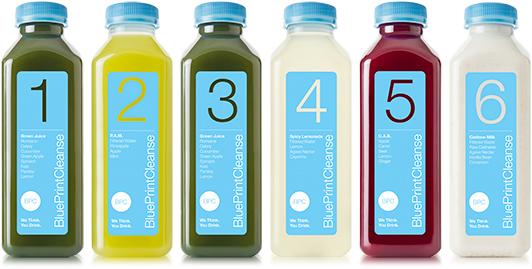 With the holidays behind us and the start of the new year here, most people probably have the resolution to lose weight. I never make that kind of resolution, mainly because I’m just always hungry. While some people just cry into their lean cuisine’s at lunch, some girl is walking around the office with stupid green juice. If your plan for 2015 includes getting healthy, which is probably a smart resolution, you might consider doing a juice cleanse.

Well you are in luck, because I did you the favor of doing a juice cleanse to let you know if it’s worth the time, money, hunger, tears, etc.

I opted to do the BluePrint Cleanse, because I had heard of it online and through friends. I found an offer for the cleanse on Gilt City, so I thought what a better excuse to go ahead and try it.

When you order, you have to plan your cleanse to start the day your juice arrives. They overnight it to you, so it comes cold and you need to get your juice in the real fridge pretty quickly after your package arrives. So that can be kind of a hassle, but not that big of a deal. I opted to do a 3 day cleanse and started it on a Friday. I didn’t want to run the risk of being hangry or tired at work, so I wanted to do the cleanse over the weekend.

My juice arrived in a big cooler and I picked up my package from my apartment’s front desk about 2 hours after it arrived. The day your cleanse starts, BluePrint recommends you just drink water that morning if your juice doesn’t arrive until later in the day. Luckily mine showed up around 10 am.

I was hesitant about the juice itself, because I have the palette of a 6 year old a lot of the time, so I’m not into a lot of weird vegetables. I got 6 juices for each day and they were each numbered in order of how I was supposed to drink them. Because I guess people need guidance on which juice to drink and when? 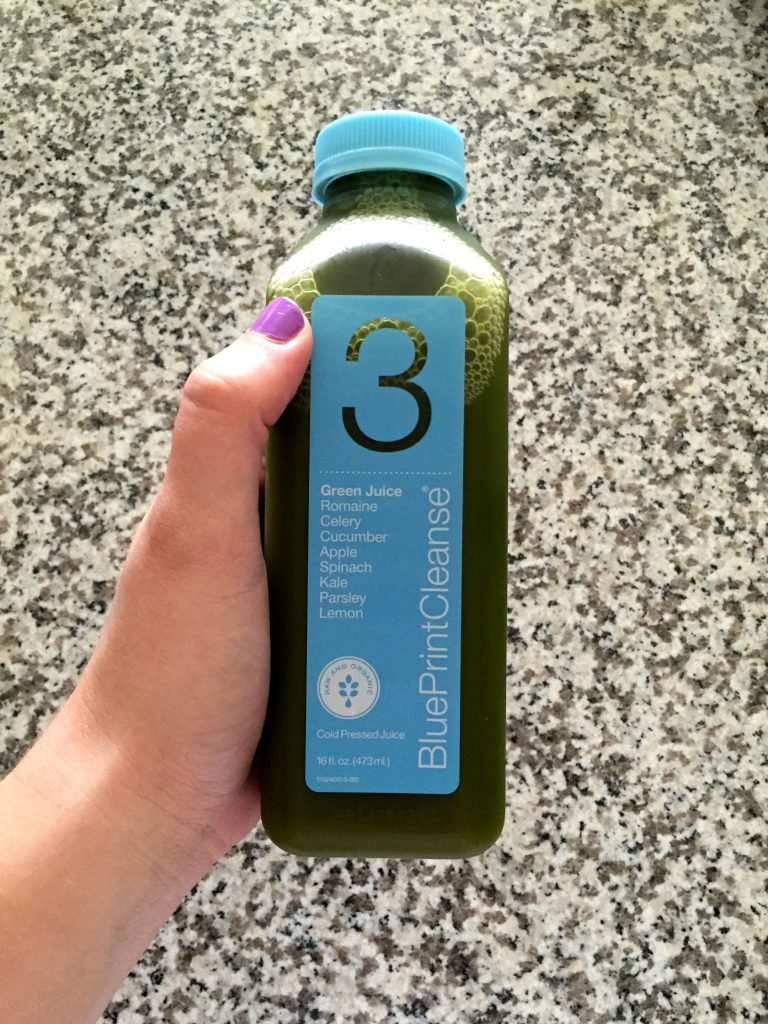 Green juice is probably the most disgusting thing I can possibly imagine putting in my body. I’m not sure what I would compare the taste to other than maybe hot garbage, but that’s probably not even a fair comparison for the hot garbage, it may actually taste better. If you ever see anyone walking around with a bottle of green juice or someone posts on Instagram how great their green juice is and how great life is because of it; just punch them in their stupid face. That person is lying to you and if they actually are telling the truth, punch them anyway because they have the IQ of a toaster.

PAM was pretty good stuff. The mint was really strong in this, but still tasted delicious. After that green juice, this tastes like a New York strip.

Spicy Lemonade is lemon, water, agave, and cayenne.  I’m not into anything spicy because I take two max strength Pepcid ACs just to drink water. This juice wasn’t actually that spicy. It just has this slight kick to it. It tasted pretty good and I ended up drinking it in the afternoon, so it was a good pick me up.

I was very pleasantly surprised by this juice. I was worried it would taste like a mess of this stuff, but you pretty much just taste the Beets and Apples, which tasted really good together.

This juice was made up of Cashew Milk, Agave, Cinnamon, and Vanilla. This juice was the stuff. I loved this one; I would drink it on its own anytime I could. It basically just tasted like eggnog, so I don’t know that it was that healthy for me and I don’t even care.

To give you some idea of what the actual cleanse is like, my sidekick Chuck will help demonstrate. 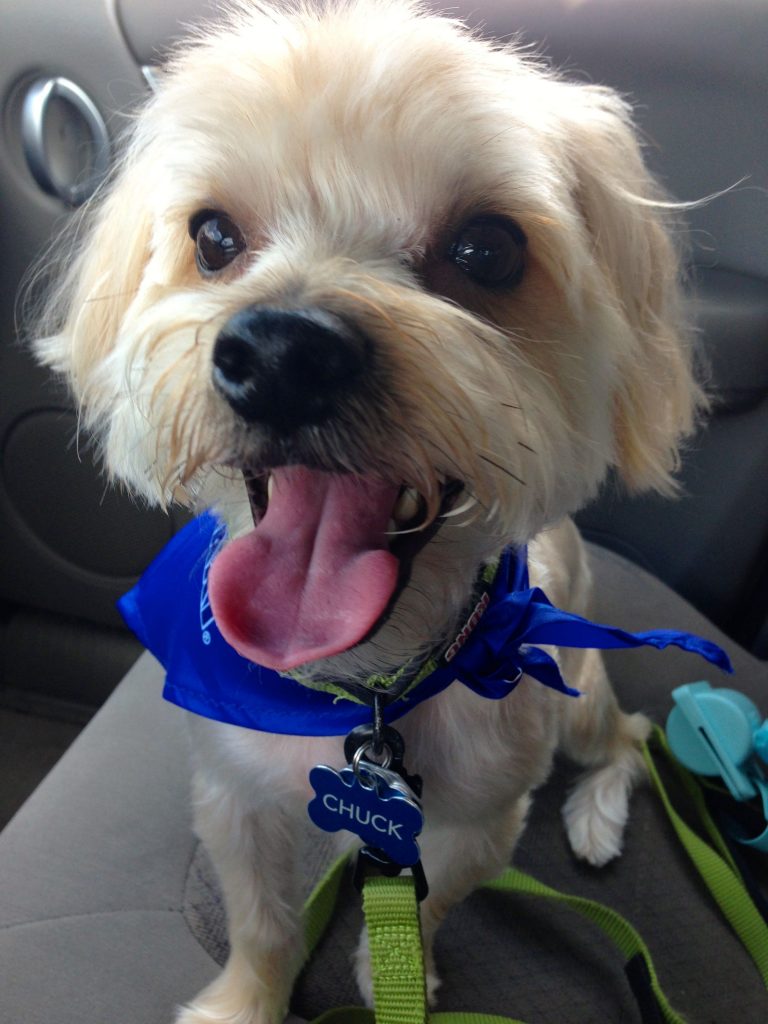 By the time I got my juice on day 1, I was really hungry and hadn’t had any coffee, so I would have eaten the ice packs in that box if thats all there was. I was really feeling motivated to do this since I’d committed to it. I popped out Juice 1, gave the green juice a sniff and recoiled in horror. “I’m supposed to drink this?! OK, everyone loves the green juice, so it must just smell weird, this is going to be fine and I’m going to look like Jennifer Aniston at the end of Sunday I can do this.” I took my first drink and spit it right into the sink. I know, not my finest moment. I tried a few more sips and kept wanting to toss my cookies, so I just called it quits on the green juice. It was fine because I had four other juices a day to drink without those and I could just substitute plain hot tea in the mornings. 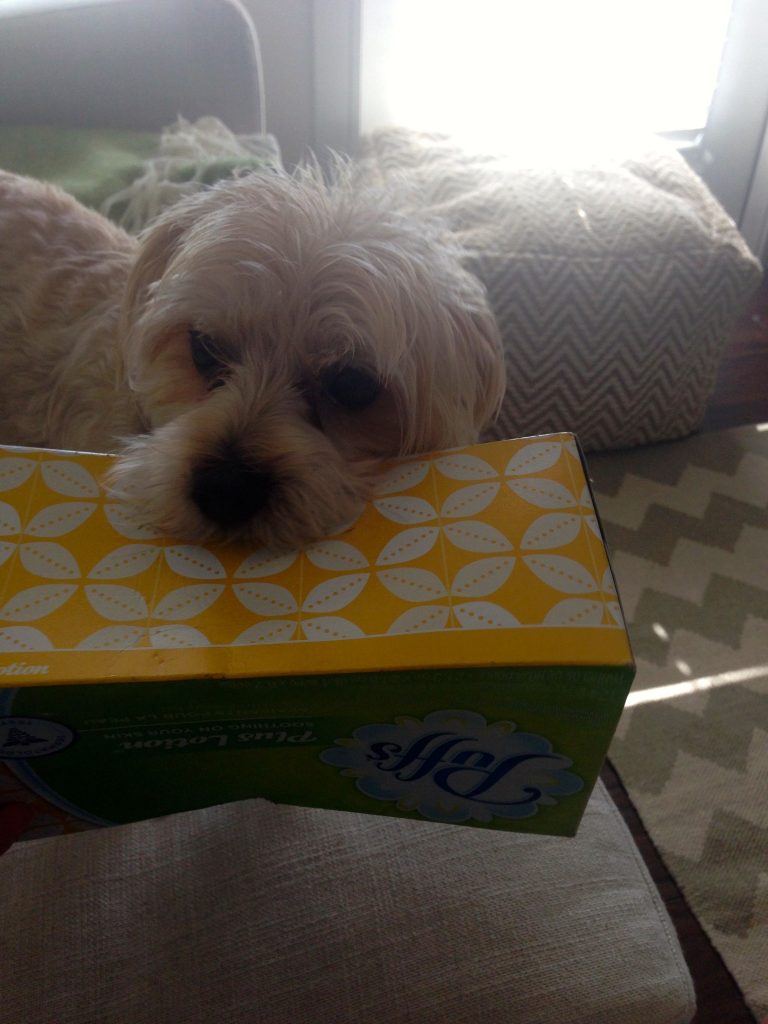 I would rather eat this box of tissues than drink green juice.

Throughout the day I drank my other juices and really liked them, so it was fine. I still felt really motivated to keep going. I was just kind of annoyed that the green juice was so disgusting and the cleanse isn’t cheap even with the Gilt deal. But I knew I would feel great on Sunday, so I kept going. 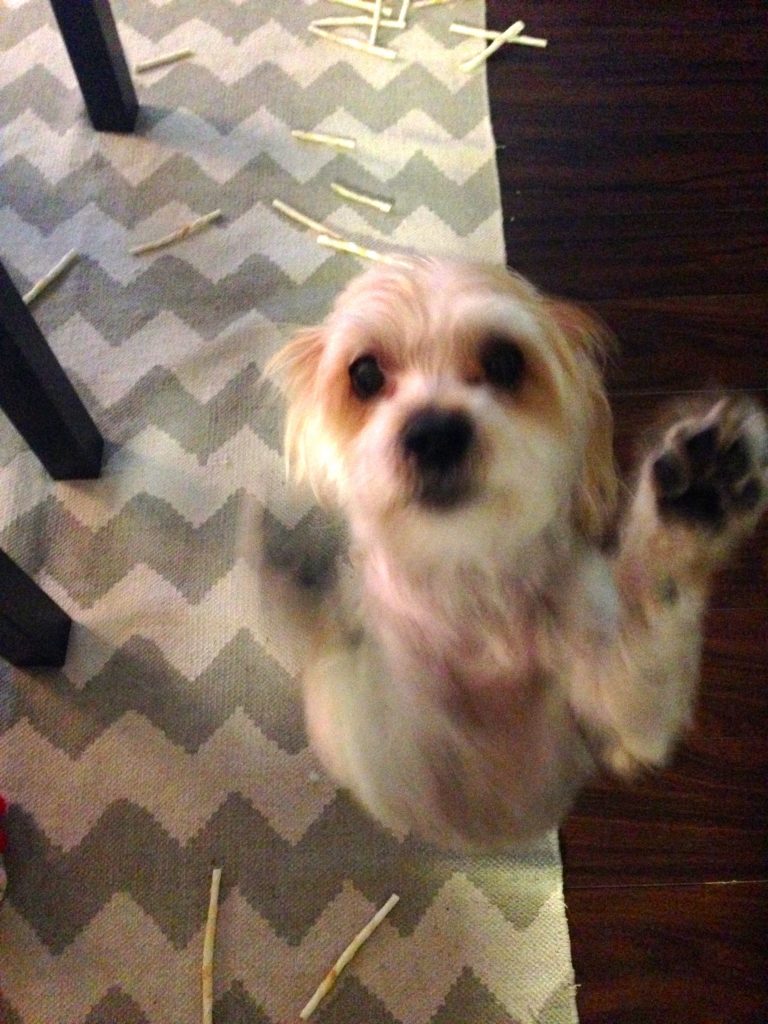 On the morning of Day 2, I did my normal Saturday routine. I woke up early and went to barre class, then Target, and took Chuck to the park. I felt great at barre class. Even though I hadn’t eaten the day before, I still felt like I had great energy and got through the  class fine. Chuck and I got home from the park around 10:30 and that’s when I started to really feel the effects of not having eaten in over 24 hours. I felt really wiped out and just wanted to take a nap. 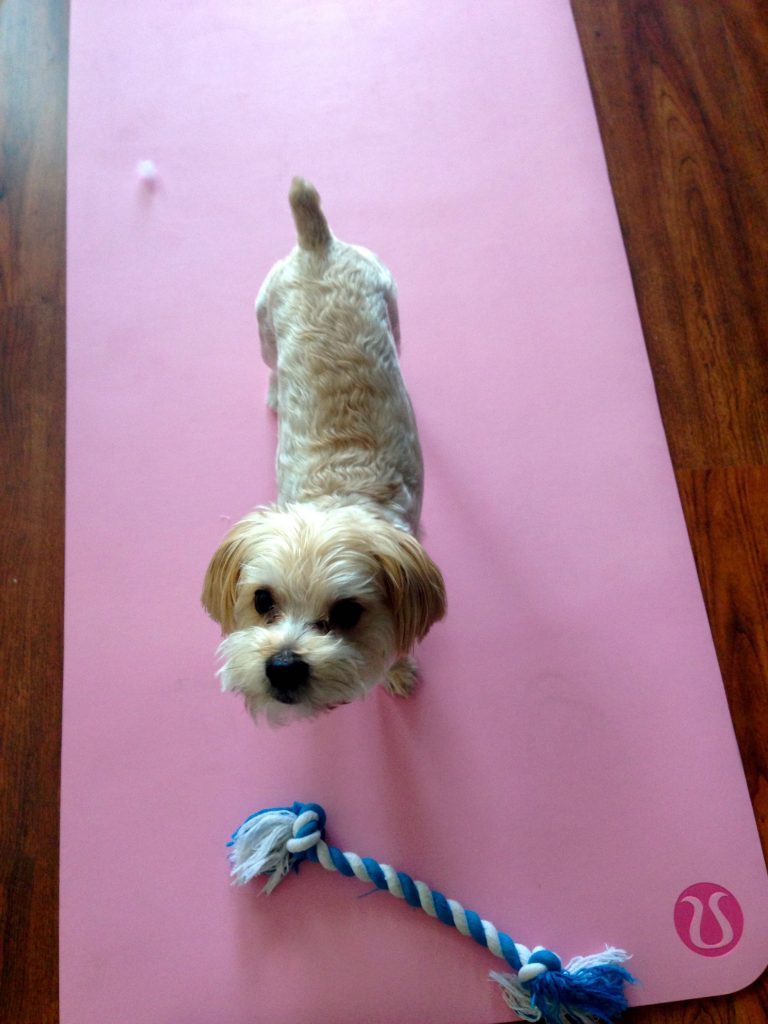 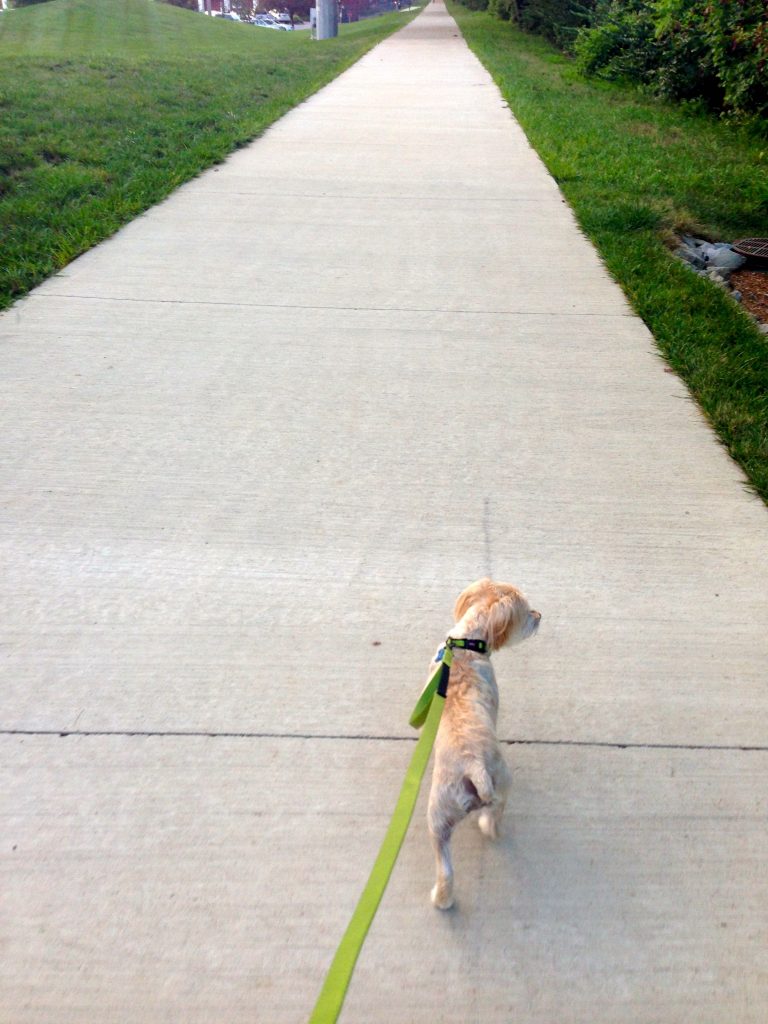 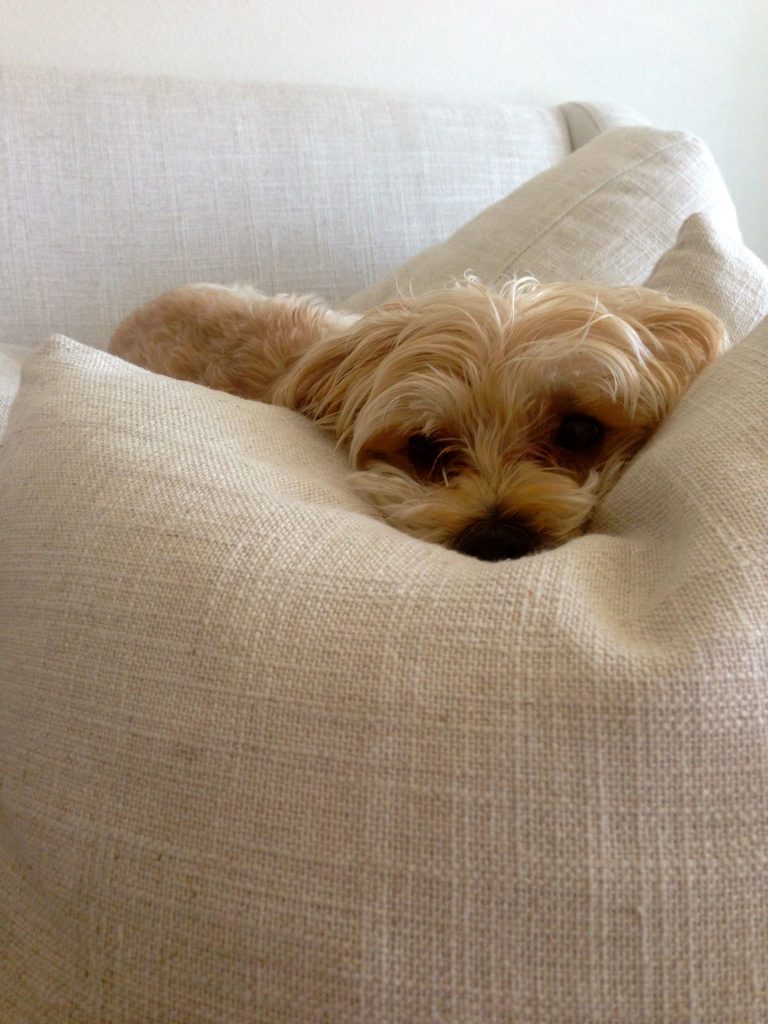 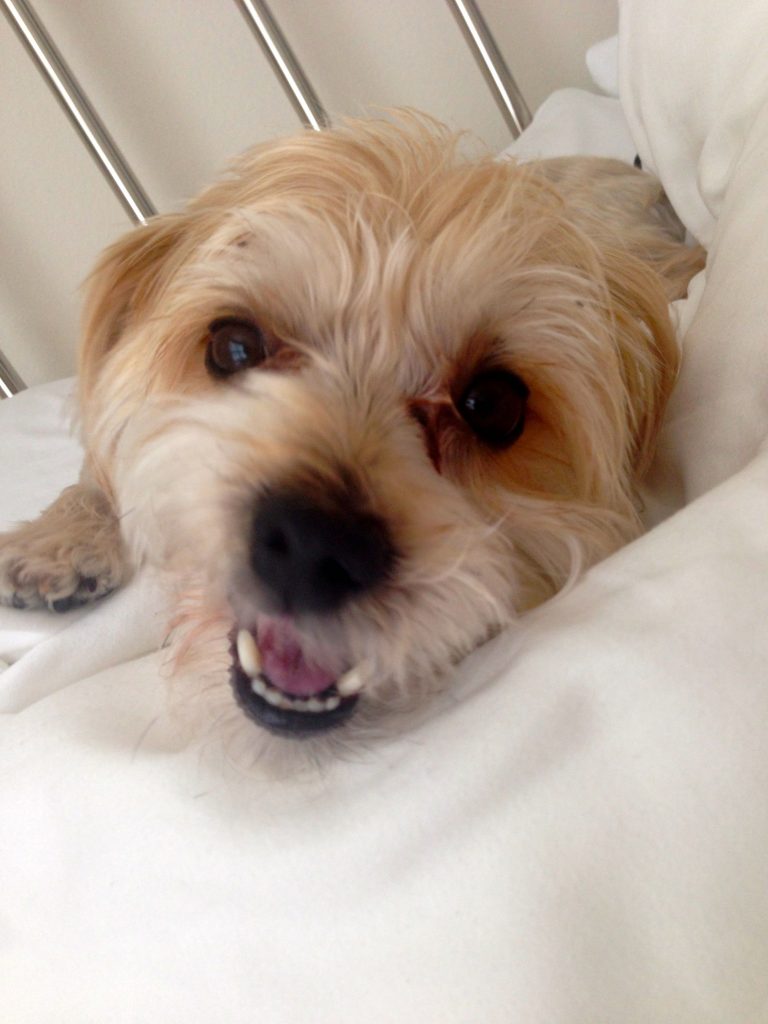 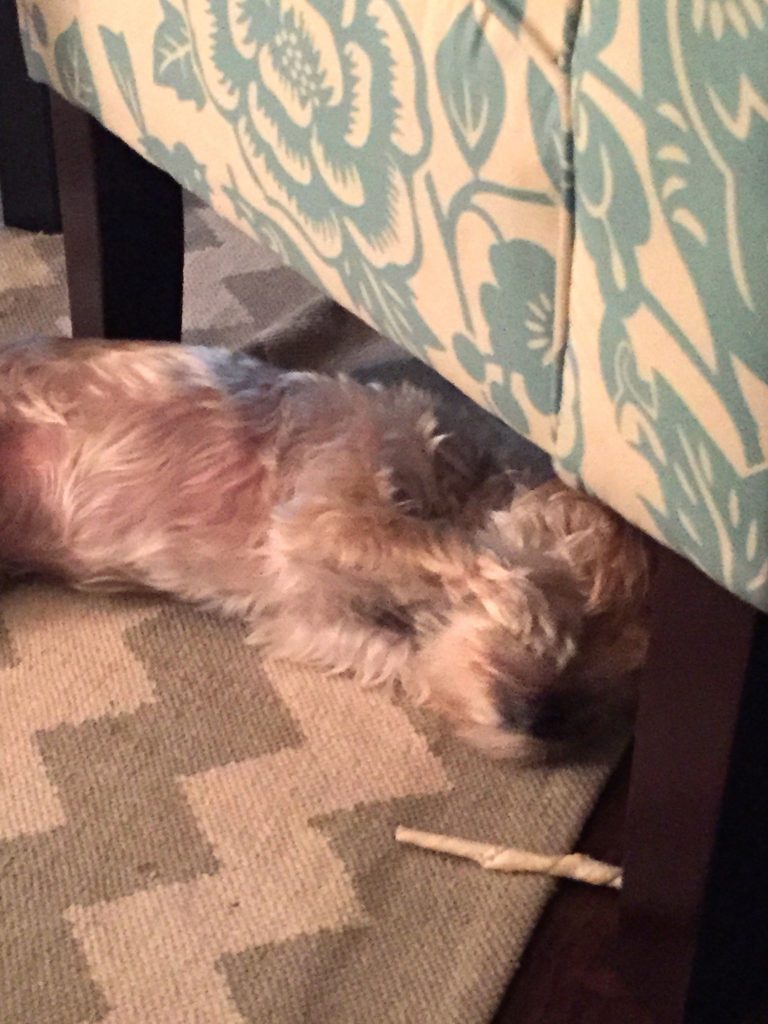 I woke up from my nap, not like Sleeping Beauty, but more like Smaug the dragon. Chuck ran and hid under my bed for the entire afternoon. 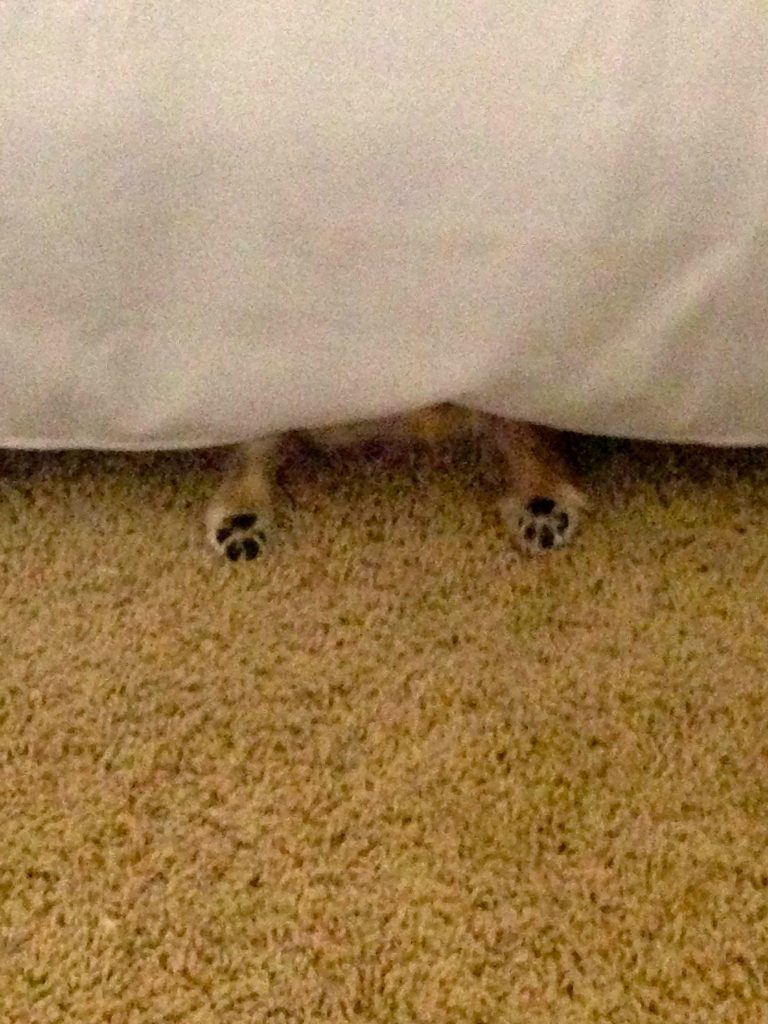 Not having eaten, my coordination was apparently suffering. I kept doing really stupid things, like stubbing my toe and bumping into the counter and you’d have thought I had been tased the way I lost it. I was so over it I just went to bed at 7pm. 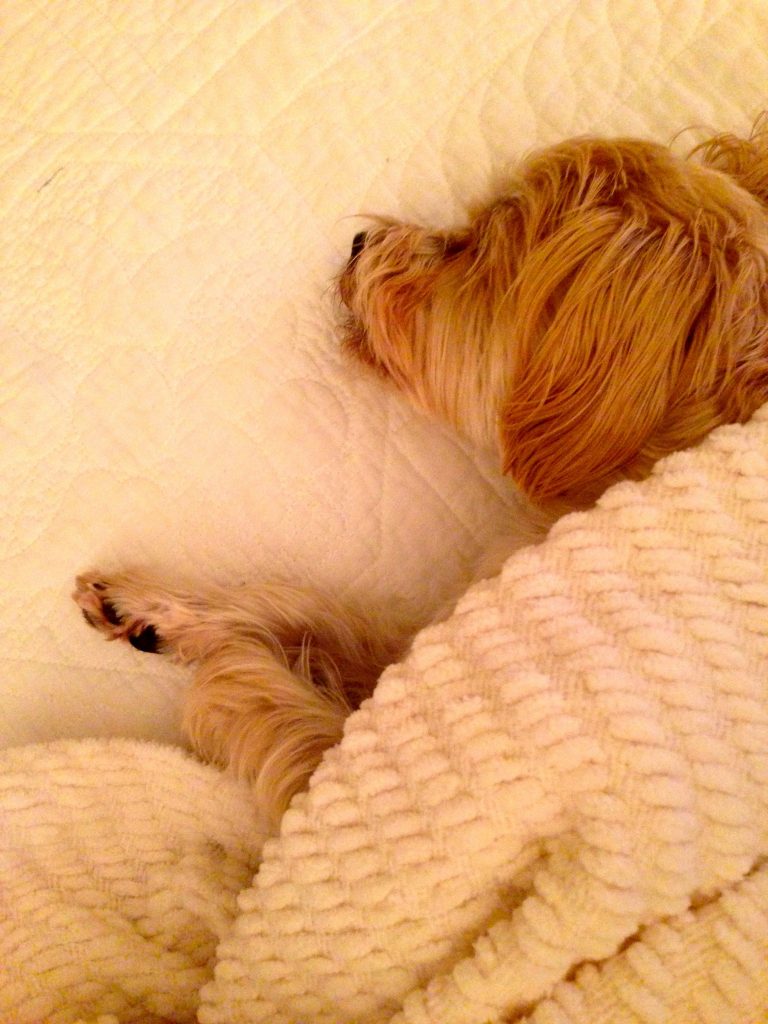 I woke up feeling much better than when I went to bed. That was probably also due to the fact I slept for 12 hours straight. I didn’t go to barre class like I normally would have, because I just didn’t think I’d survive it. I was feeling a lot better, but still kind of out of it. I think the main cause of my issue was not having any caffeine; I normally have a giant cup of coffee in the mornings, then another to be safe. So I was having real withdrawal symptoms. By the end of day 3 though, I did feel really good but didn’t really see the benefits. 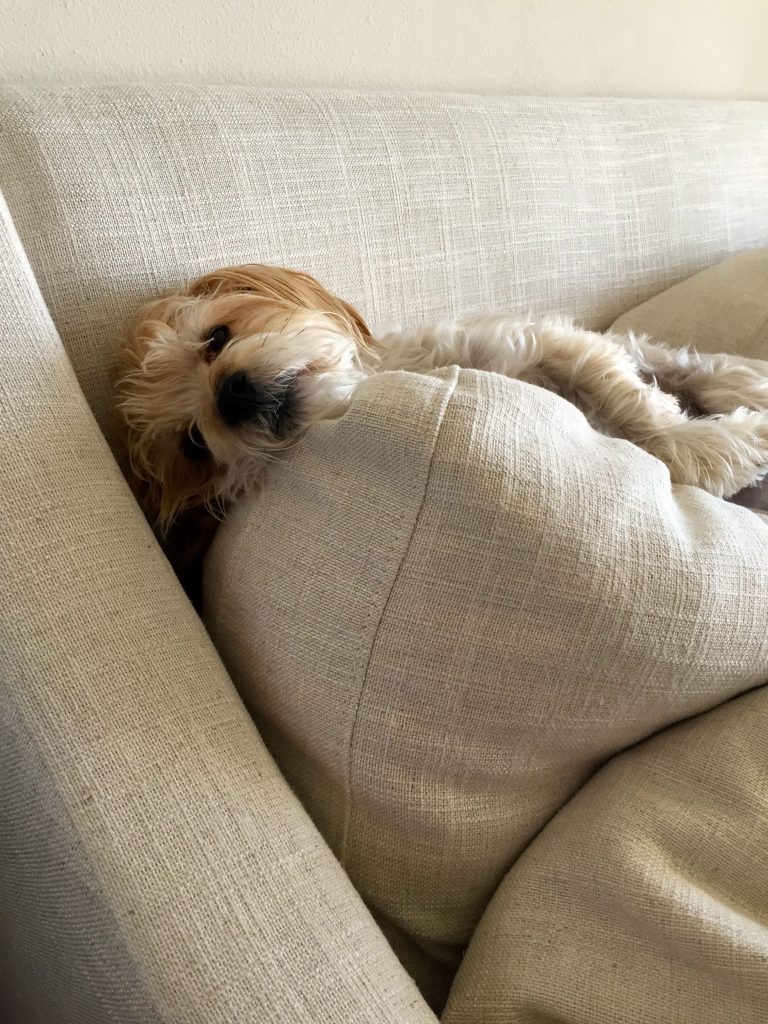 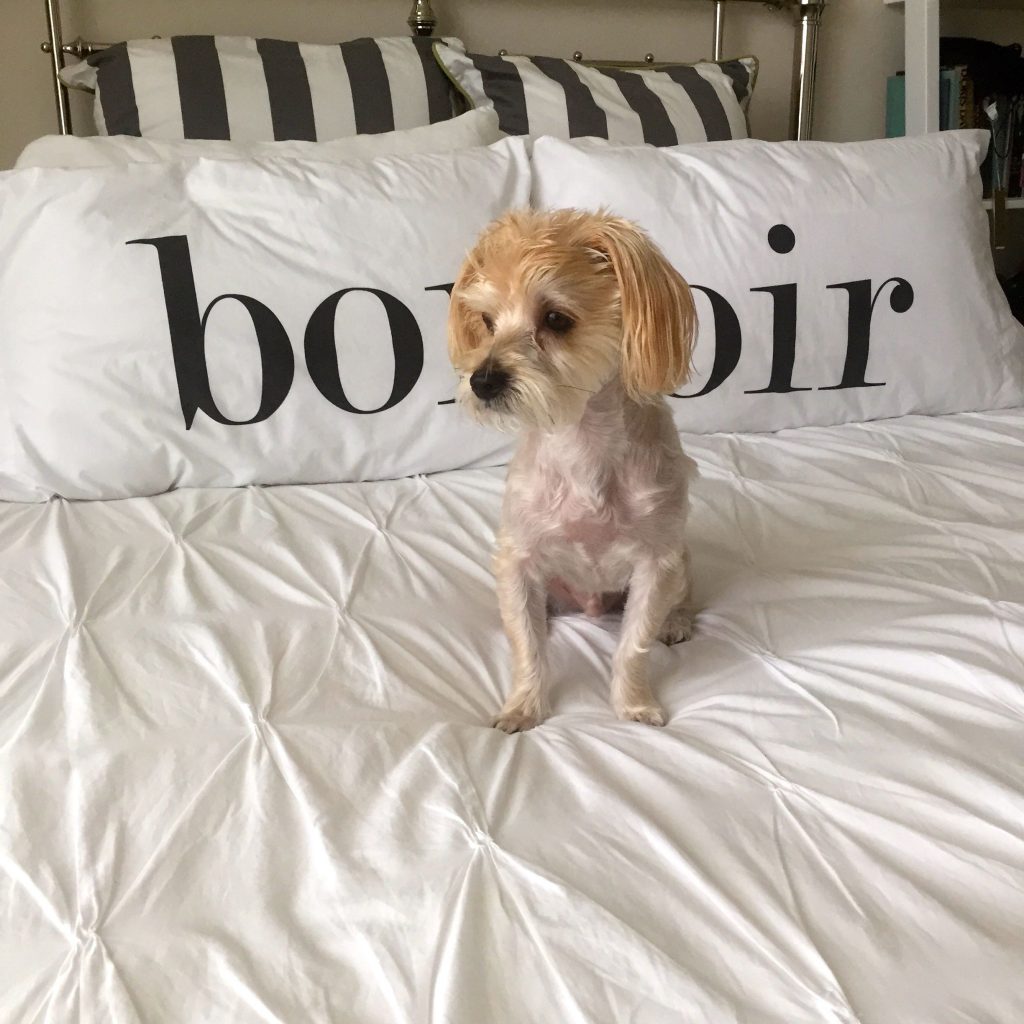 I couldn’t wait to go back to a normal life.

Day 4: Back to the Real World

The morning of day 4 was glorious. I went straight to Starbucks and asked for a coffee the size of my head. (Note: I have a giant head. I must buy hats in L/XL bc I have so much hair and noggin. It is not due to being full of secrets though.) I didn’t get a breakfast sandwich like I was so tempted. BluePrint recommends easing back into your food routine and eating soup and lighter foods the first couple of days. 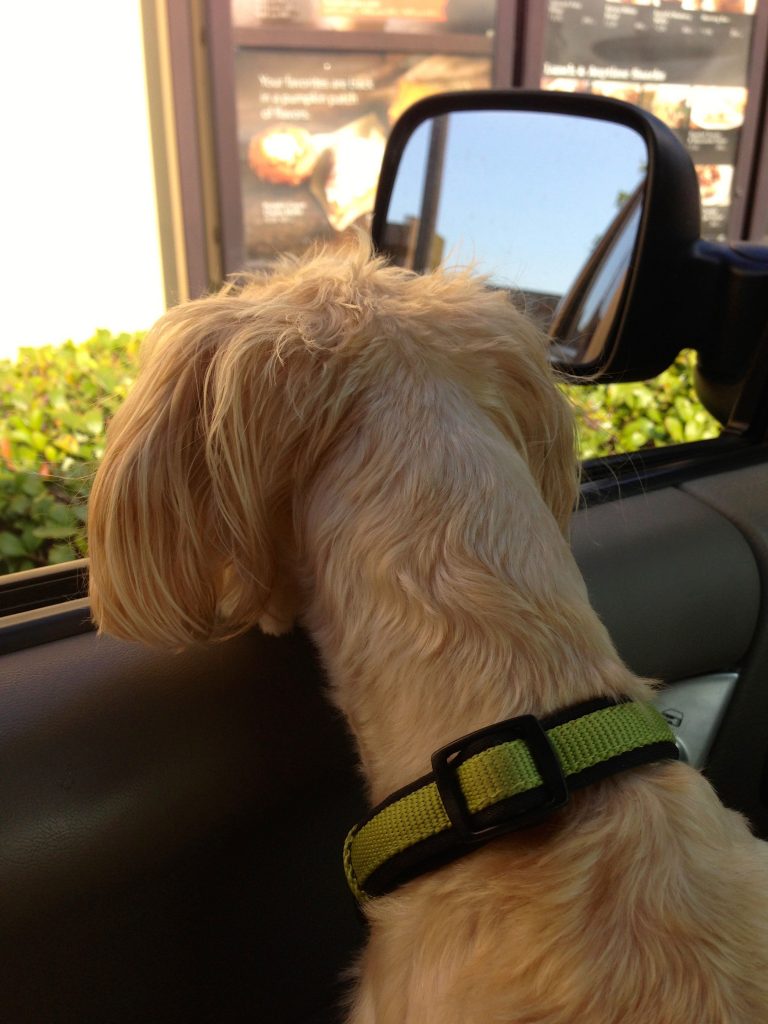 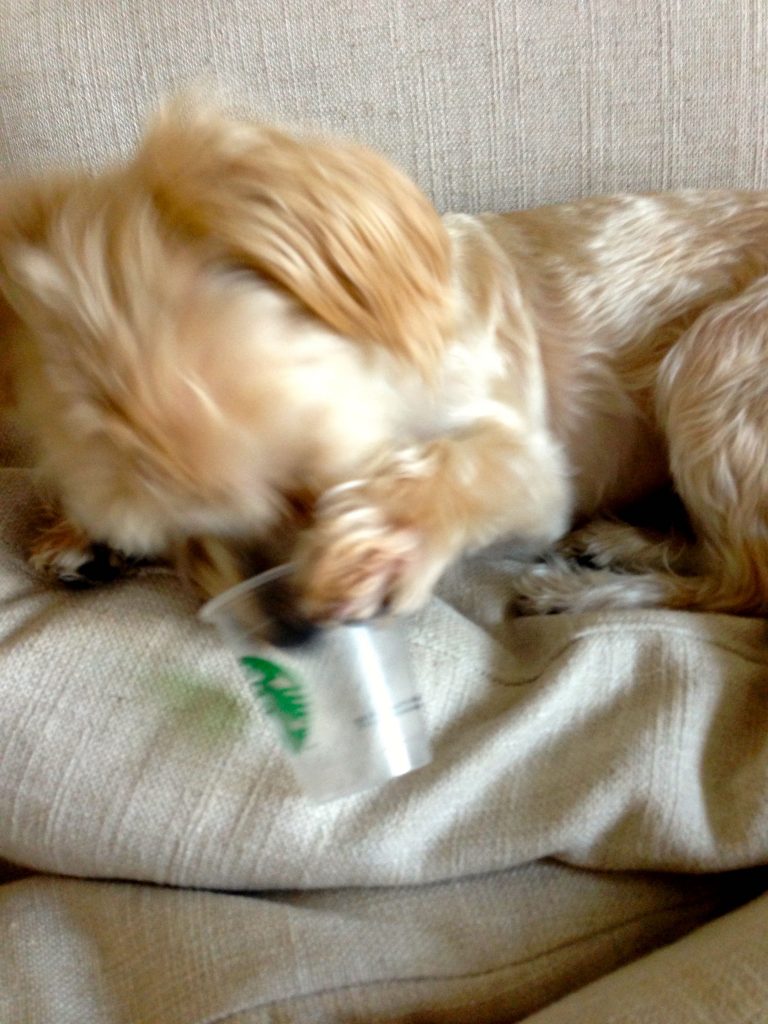 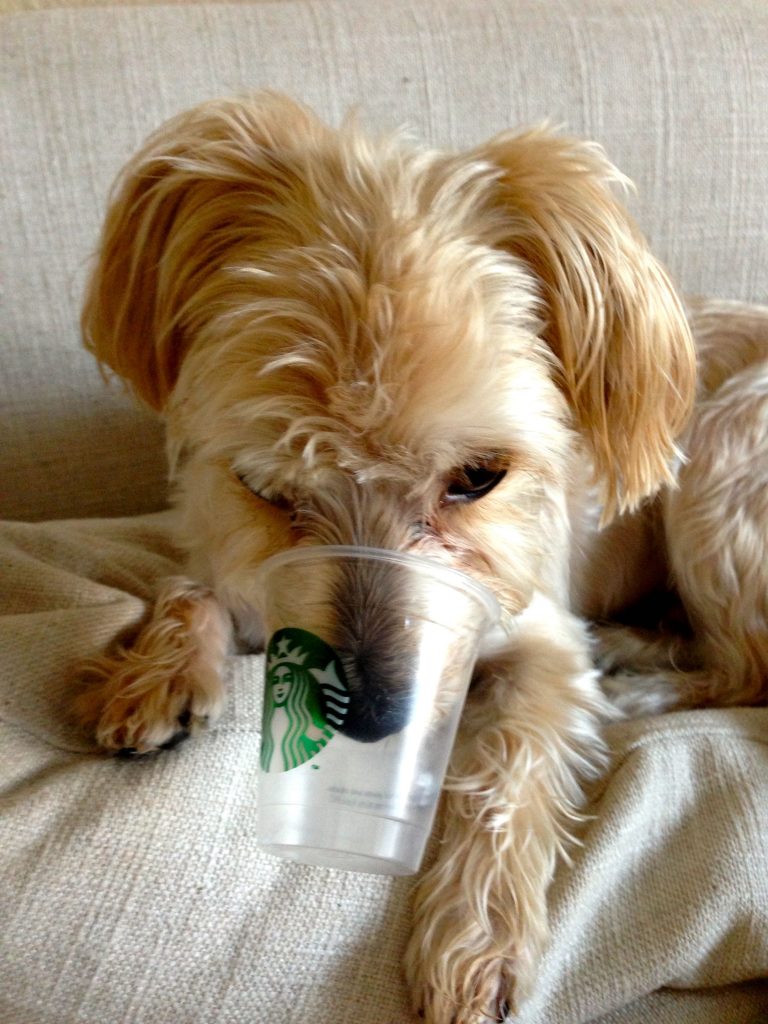 Towards the end of Monday, I was starting to realize the benefits of my cleanse. I felt so much more focused on work and just felt energized and more motivated than I had before. I tend to eat a ton of crap food, like sugar. So going a few days without it, made a huge difference in the way I felt.

Was it worth it?

Overall, the juice cleanse was a bumpy ride and I spent the majority of the 3 days thinking about what I was going to order at Taco Bell. I could tell a big difference in my level of energy and overall I just felt better. I tried to avoid eating so much junk food for a while after the cleanse. I felt more motivated to eat healthier because I realized how much better I felt when I didn’t eat so much processed food; which I guess was probably the point of the whole thing anyway. I would definitely do it again even though it was 3 days of every food commercial known to man playing on TV.

If you are anything like me and have a hard time kicking junk food, a juice cleanse is a good option to help you go cold turkey. Just be sure to stay far away from civilization and your loved ones for those days.

Just be careful not to overdo it, otherwise you’ll be all skin and bones! 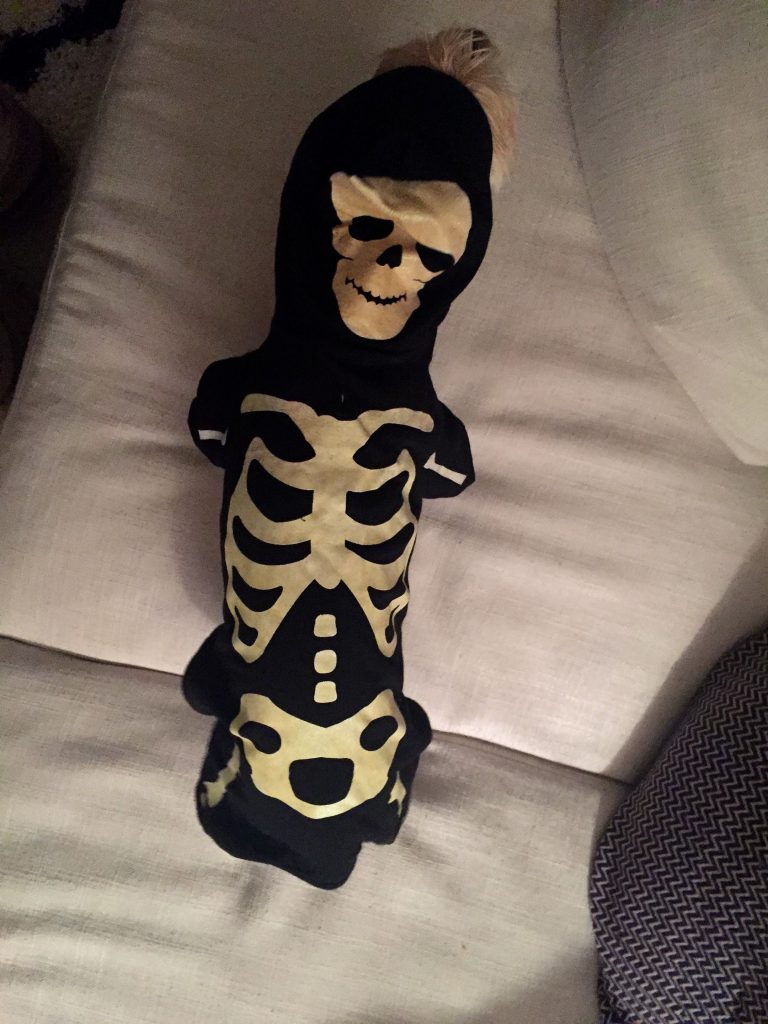 I am thinking of doing a juice cleanse but only if I can have grilled cheese sandwiches in between. Chuck is an amazing actor! 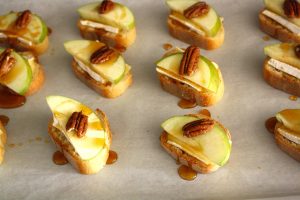 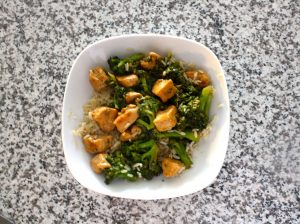