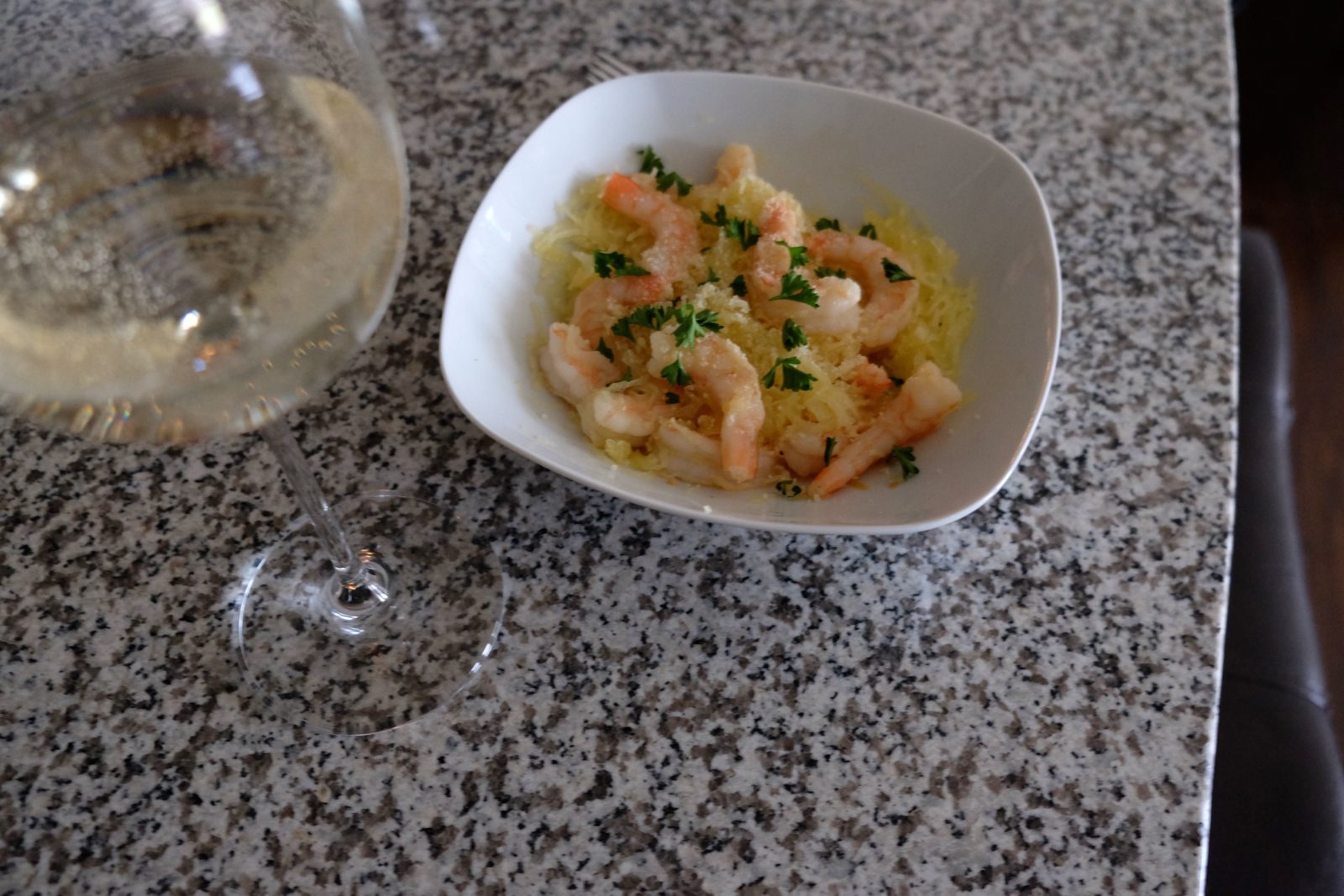 So I’m still on this eating healthy kick. I know, it’s not as much fun as eating fried food and 27 iced coffees a day. But I am already feeling and looking better.

The hardest part of eating healthy has been finding recipes that I actually will make or dishes that don’t involve kale. Just stop with the kale people.

I found a recipe for spaghetti squash last week and have been really interested to try out this spaghetti squash for a while. A friend of mine is gluten-free and has been telling me how great it is for a while, but obviously it sounds healthy so I’ve never tried it.

I am actually happy to report that spaghetti squash is pretty good and really easy to throw together with anything. I made this recipe over the weekend for Spaghetti Squash with Shrimp and lemon garlic butter sauce and was majorly impressed. 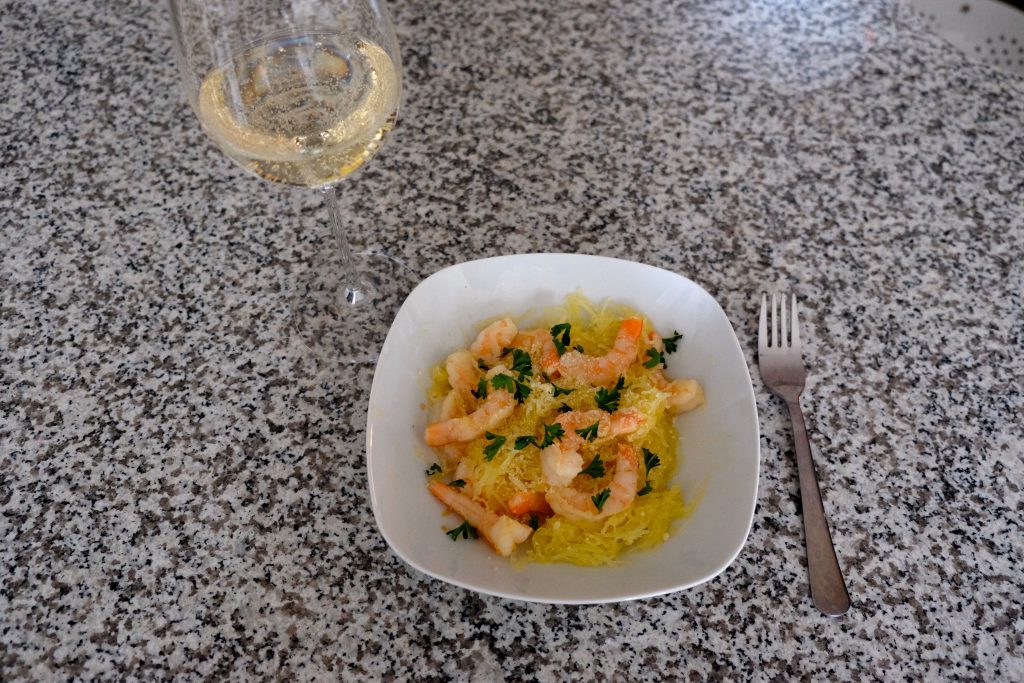 1 Medium Spaghetti Squash — they are actually called spaghetti squash, this is not a trick

The hardest part of this recipe is cooking the squash and this is not hard at all.

First, preheat the oven to 400 degrees. 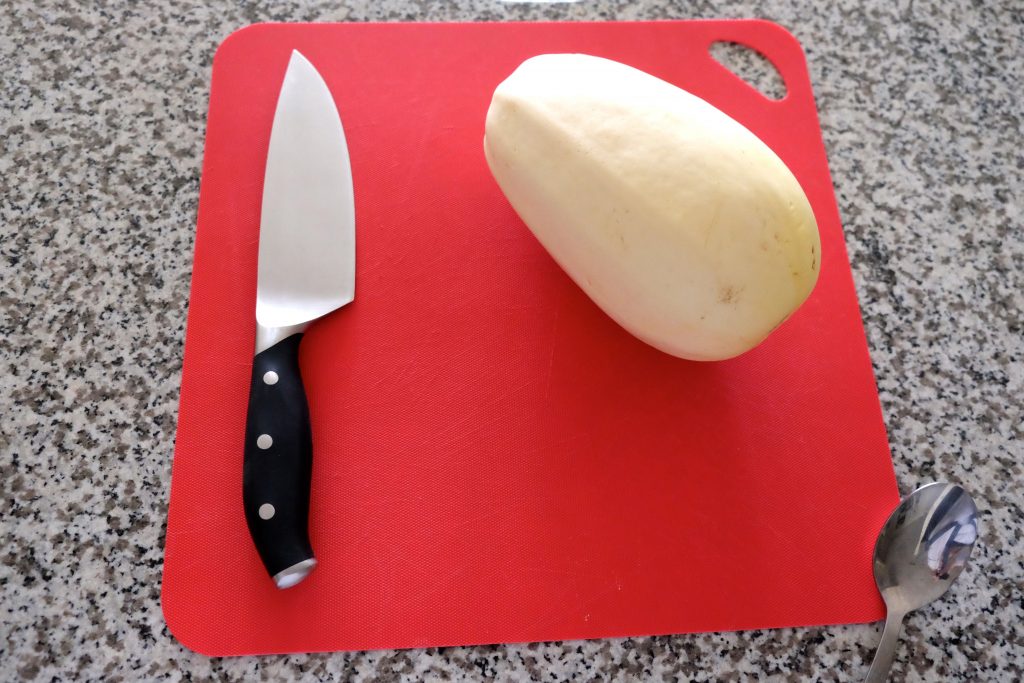 Then you want to take your spaghetti squash and cut it in half. This works best with a chef’s knife but don’t cut your hand off. That is highly not recommended. It can be really hard to cut through, so just be slow and patient.

Next, scoop out the seeds from the squash. You’ll want to just use a spoon to scoop all the seeds and stringy bits out. 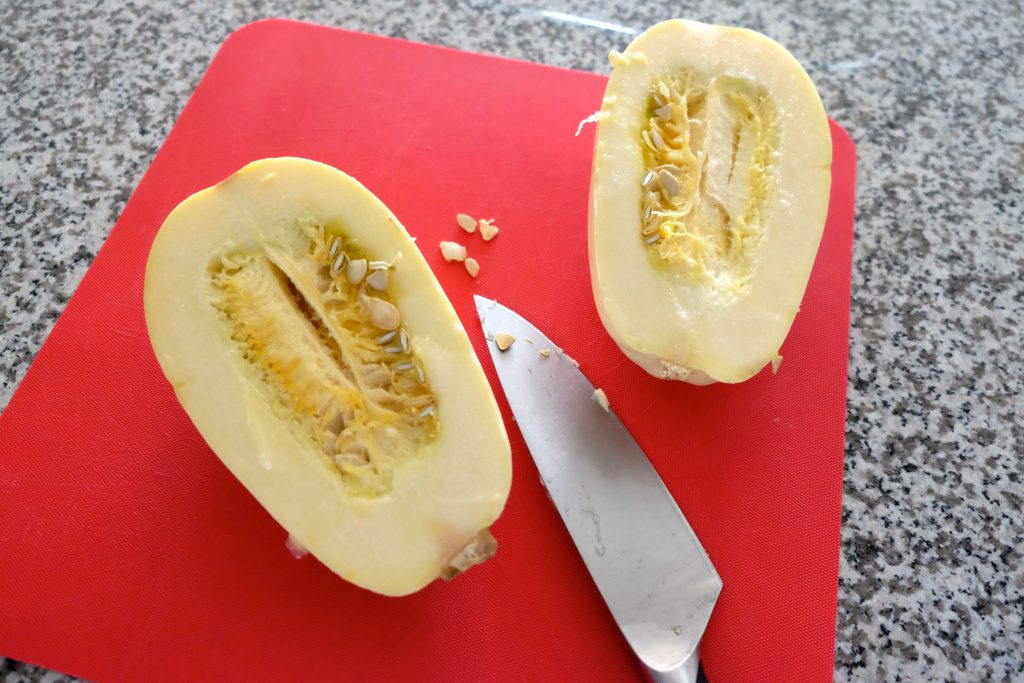 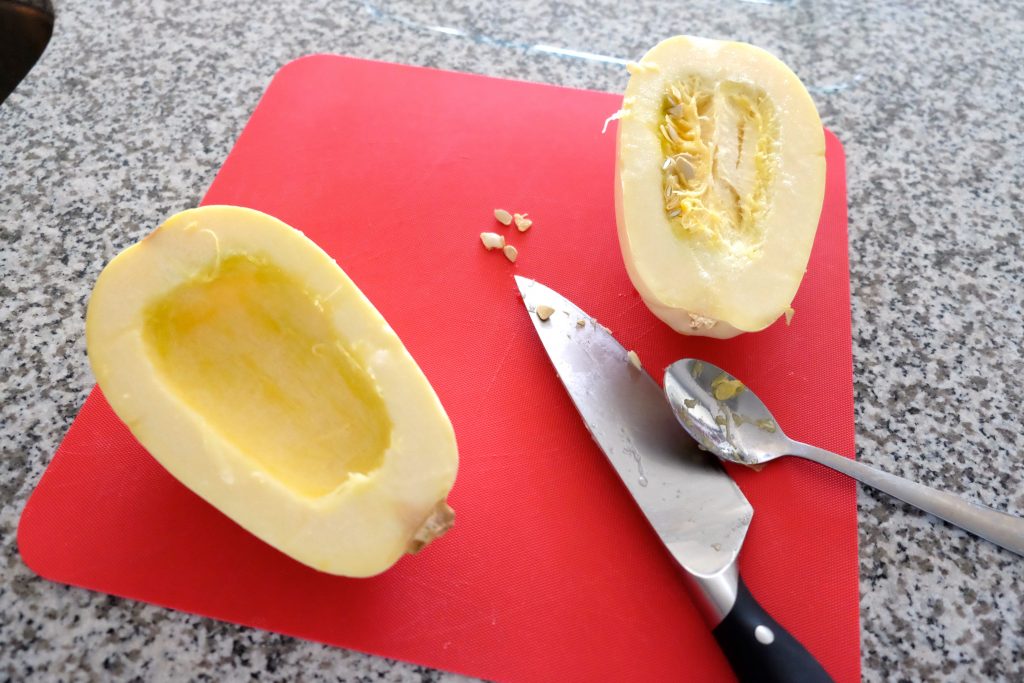 Place the squash facing down in a roasting pan. Then add a little water just to cover the bottom of the pan. You don’t have to do this, but it helps your squash steam and become more tender.

Cook for about 30 to 45 minutes. Depending on the size of the squash, it could take less or more time to cook. 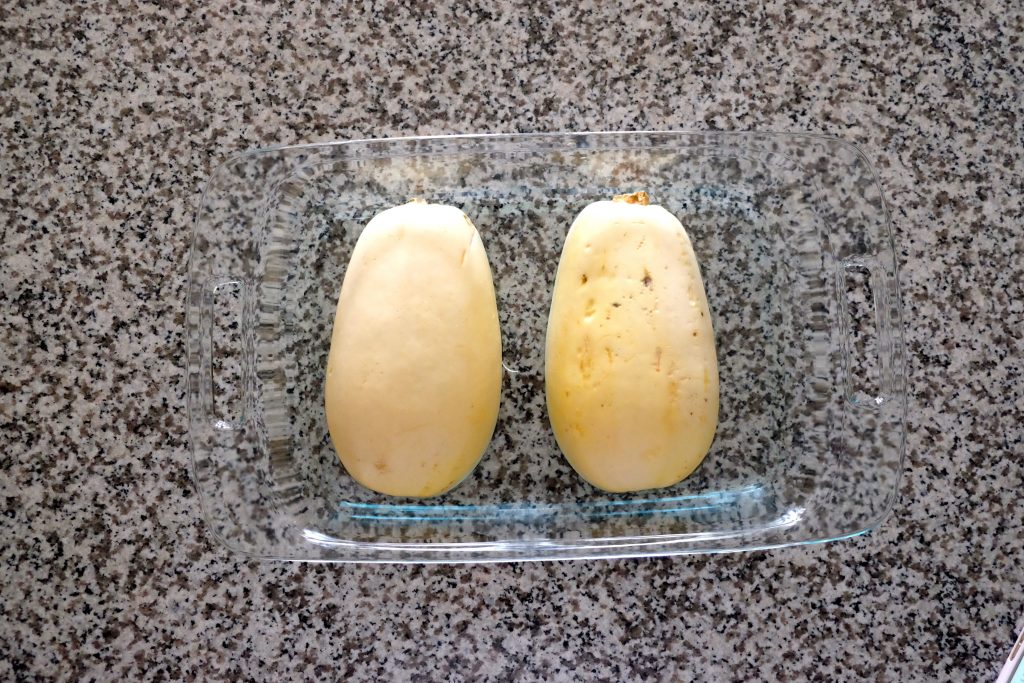 Check your squash to see if it’s done by piercing it with a fork. It should easily pierce the skin.

When it’s cooked, take out and then begins the fun part. Use a fork to scrape the “spaghetti” out of the squash. Just use the fork to scrape in one direction top to bottom to get longer “noodles.”

You squash is ready to serve at this point. So you’ll probably want to have something to go with it, because it tastes pretty bland on its own. 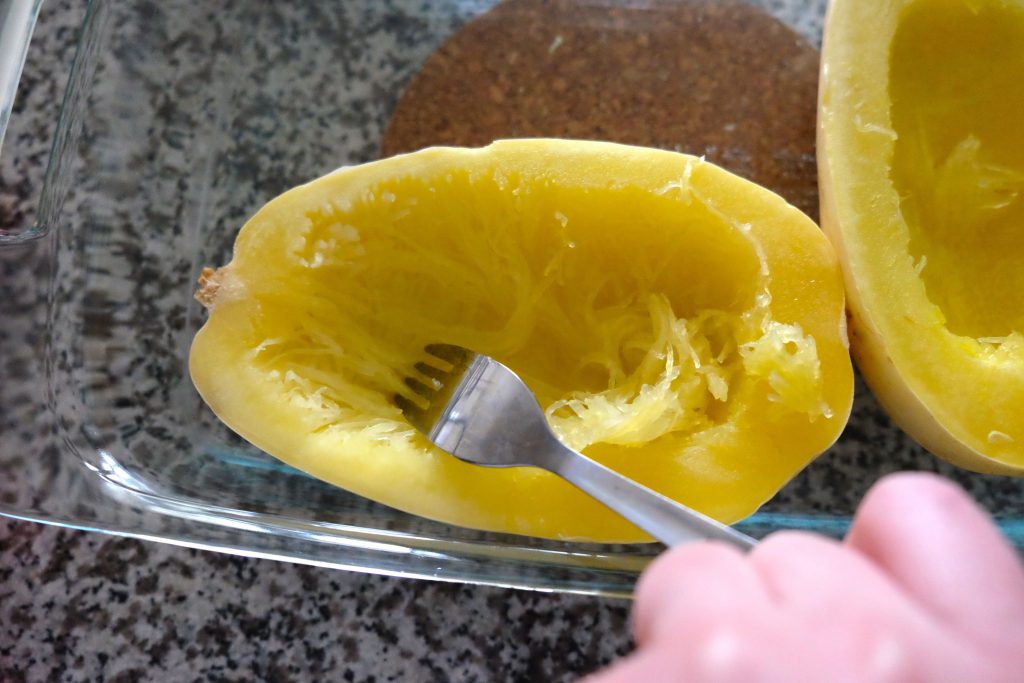 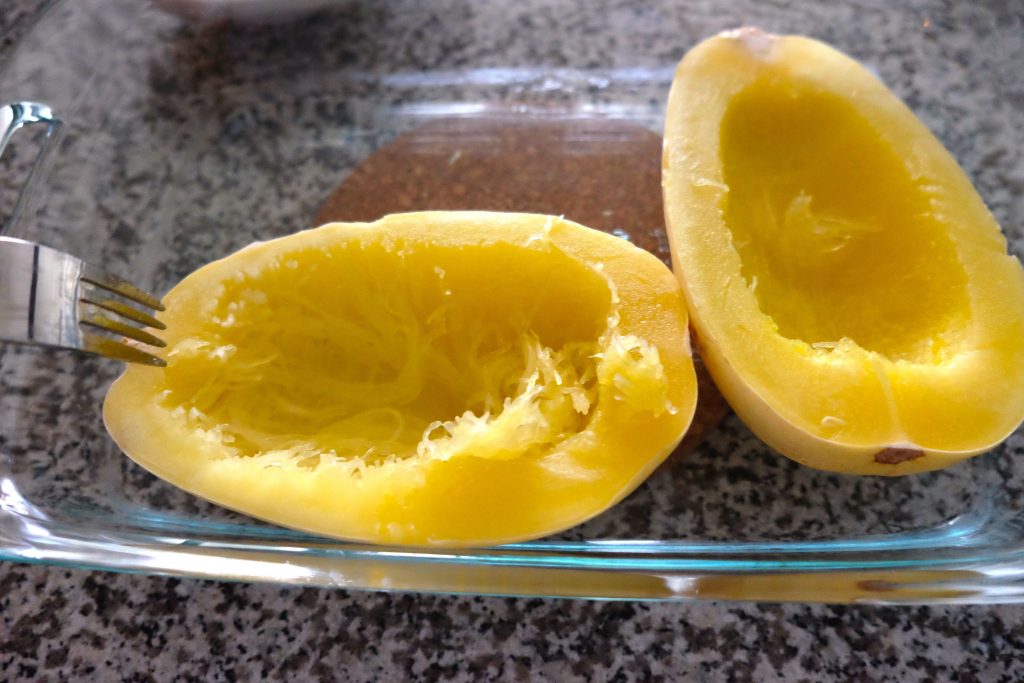 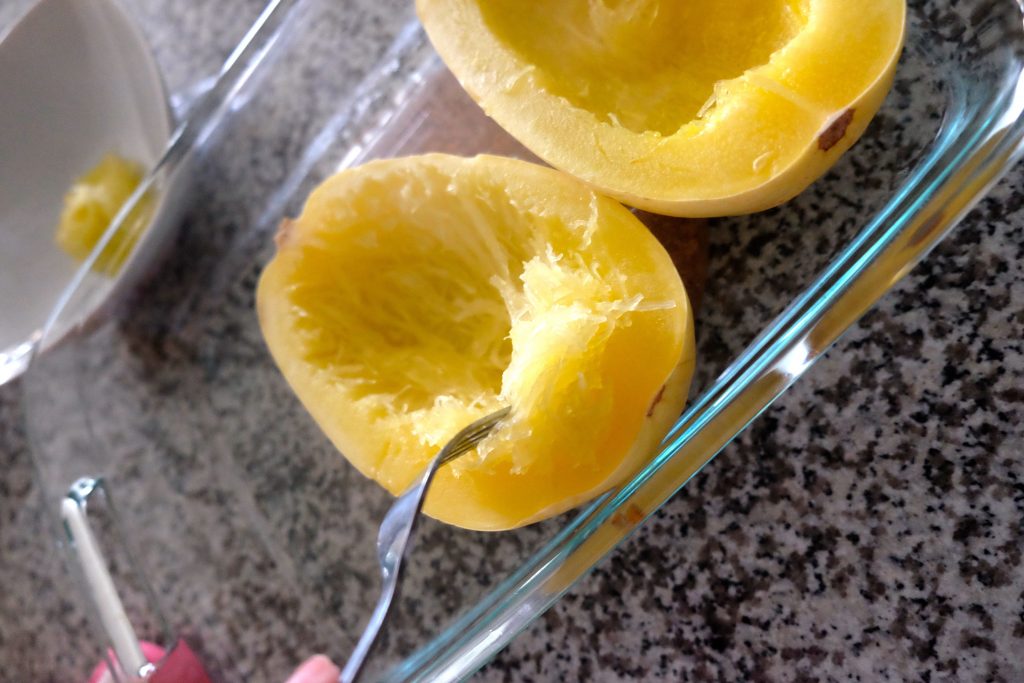 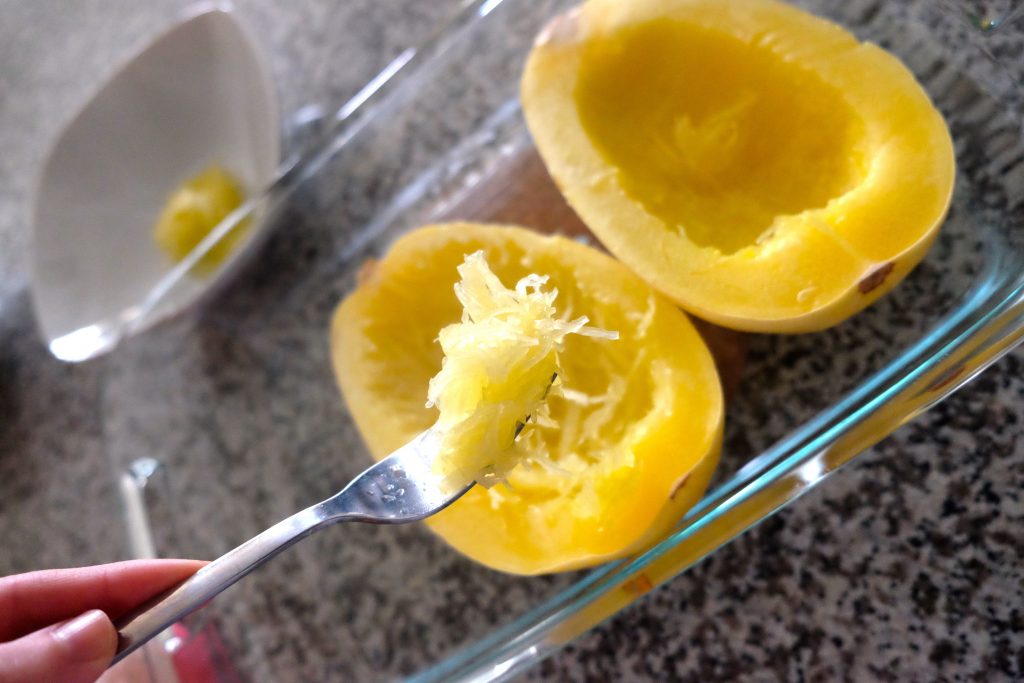 To make the shrimp in lemon garlic butter, this is actually much easier than it sounds. 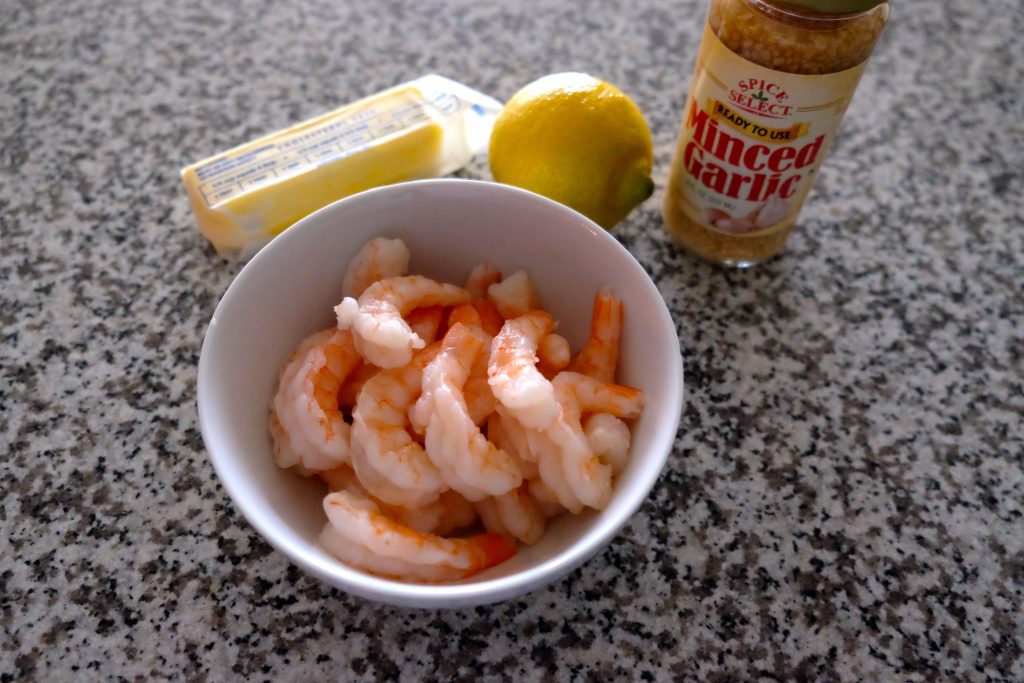 Melt the butter on medium heat. Once it’s melted, add in the minced garlic. Turn the heat down to low to let your garlic cook down. This should just take about 5 minutes.

Once the garlic is cooked, turn the heat off and add in the lemon zest and stir. Then add in your shrimp.

For my shrimp, I just used frozen, cooked shrimp. I happened to have some frozen shrimp and so that was easiest for me. I left the shrimp in the sauce over the hot stove to warm the shrimp up some since it had been frozen. 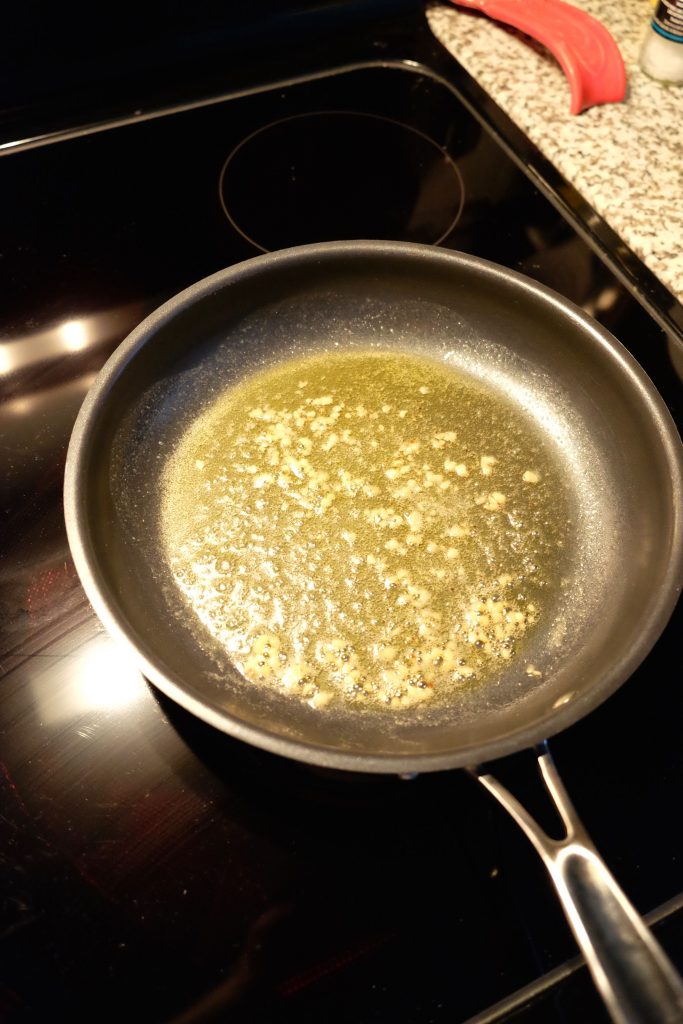 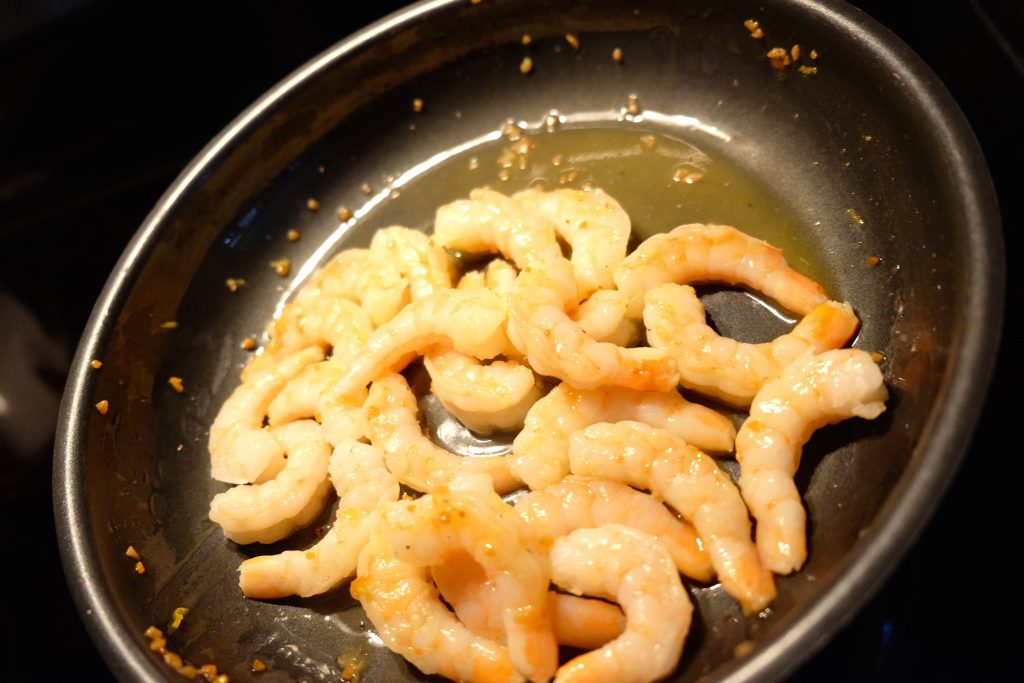 Just throw your shrimp on your spaghetti squash. Then squeeze your lemon juice over the top. You can also throw some parsley on top if you want people to think you are super fancy. 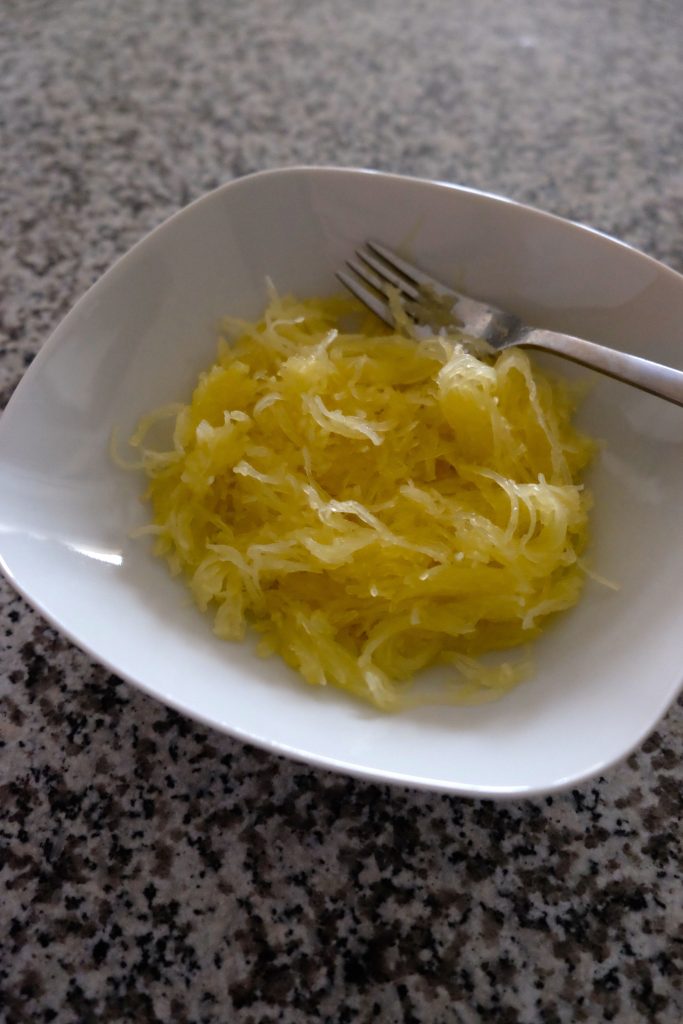 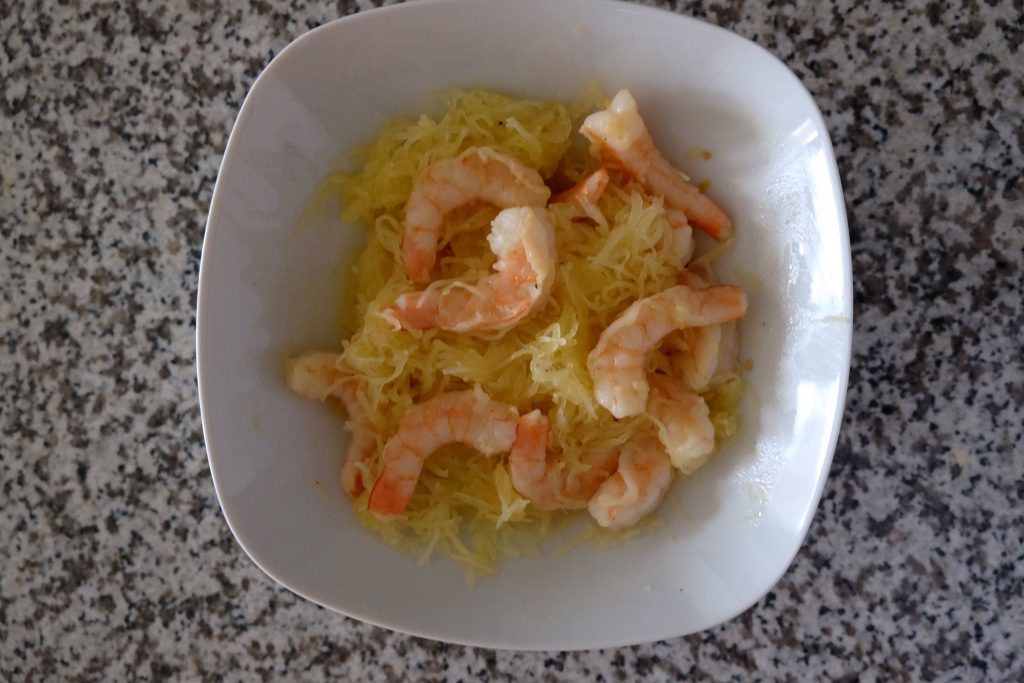 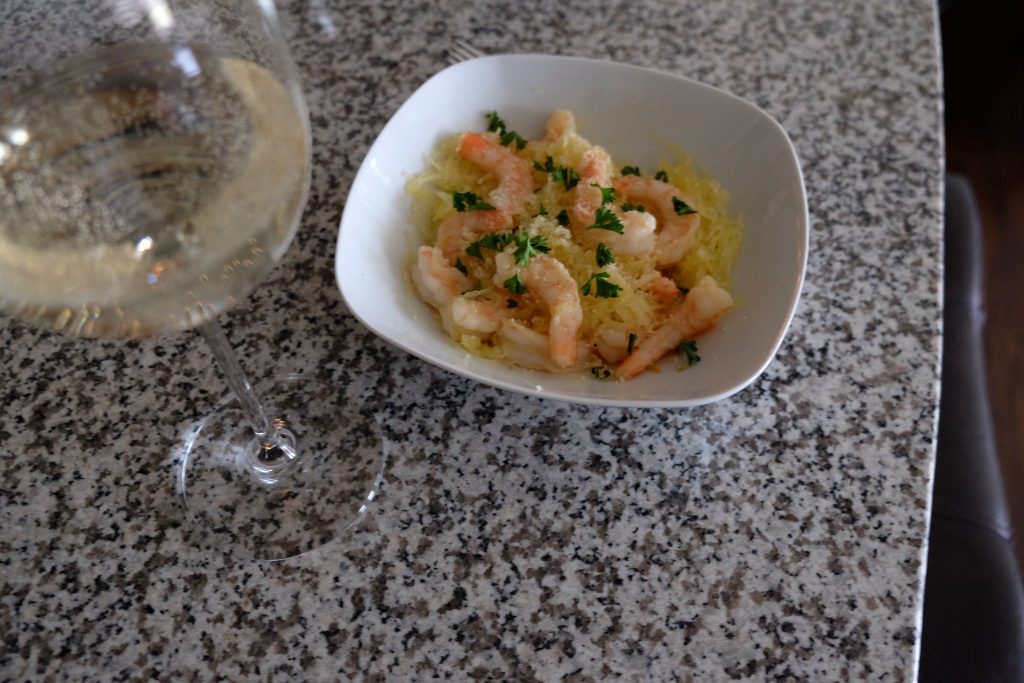 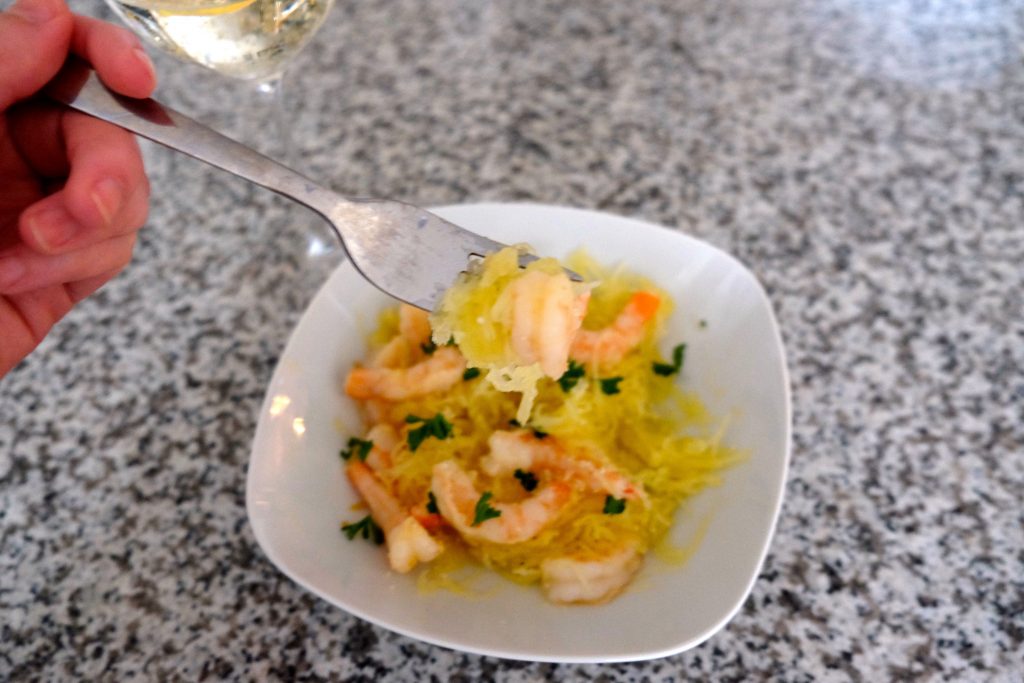 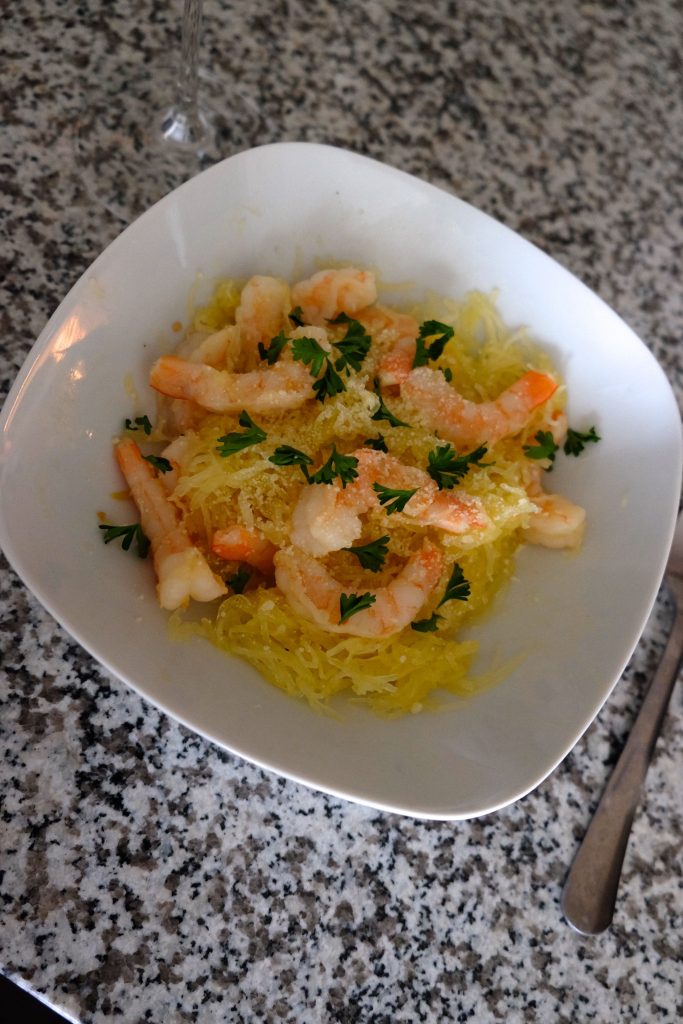 Be sure to tag me on social media and use #astudyinchic with any of your creations at home!

That looks so good! I love spaghetti squash.

You can do this same thing with the squash, but cover it in a little plastic wrap (with like one corner peeled back) and microwave for 15 minutes. Super fast! I always just throw on a little butter and parmesan and easy side dish. 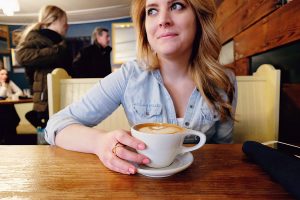 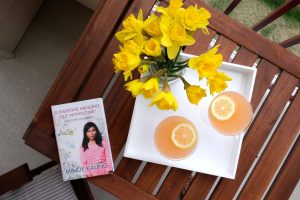